Influenza virus transmission is dependent on relative humidity and temperature

Using the guinea pig as a model host, we show that aerosol spread of influenza virus is dependent upon both ambient relative humidity and temperature.

Twenty experiments performed at relative humidities from 20% to 80% and 5°C, 20°C, or 30°C indicated that both cold and dry conditions favor transmission.

In each experiment, eight animals were housed in a Caron 6030 environmental chamber. Each guinea pig was placed in its own cage, and two cages were positioned on each shelf. Naïve animals were placed behind infected animals, such that the direction of airflow was toward the naïve animals.

The cages used were open to airflow through the top and one side, both of which were covered by wire mesh. Although infected and exposed guinea pigs were placed in pairs, air flowed freely between shelves, allowing transmission to occur from any infected to any naïve animal.

The results of transmission experiments performed at 20 °C and five different RHs (20%, 35%, 50%, 65%, and 80%) indicated that the efficiency of aerosol spread of influenza virus varied with RH.

At 20°C transmission efficiency is highest at low RH, when influenza virions in an aerosol are relatively stable, and desiccation of exhaled respiratory droplets produces droplet nuclei. Transmission is diminished at intermediate RH when virus particles are relatively unstable, but improves in parallel with influenza virus stability at higher humidities. At high RH, evaporation from exhaled particles is limited, respiratory droplets settle out of the air, and transmission is blocked. At 5 °C, transmission is more efficient than at 20 °C, but is reduced to a rate of 50% at higher humidities. 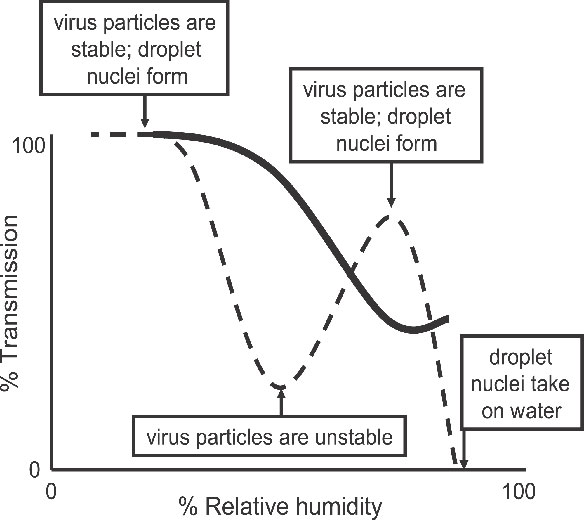 This transmission study with guinea pigs showed that at 20°C, which is around a regular office temperature, humidity plays a vital role in how effectively the flu virus is spread from host to host.

The scientists hypothesized that this was due to the expelled virus being most stable at a low humidity and retaining its infectious nature for longer.

Secondly they suggested that at low humidity the expelled infectious droplets quickly shrunk through evaporation to form small "nuclei" capable of remaining airborne for long periods, therefore increasing the risk of cross-infection.

They concluded that indoor influenza virus transmission could be curtailed by maintaining a temperature of above 20°C and humidity of at least 50%RH.

Since the study investigated the purely physical process of influenza transmission by aerosols in air, it's logical to assume the results would apply as well to 'flu transmission between humans.

Other scientific studies relating to humidity and health